I confess I don’t know all the answers when it comes to Bible Prophecy, but I have one indisputable sentence for that: (I promise you that I’m not alone). Especially when it comes to the book of Revelation, but I have studied Revelation for 44 years and I believe I have learned enough about it to come to some great conclusions about the text. I know it is very complicated and it is, but hours and hours of studying have helped me come to some amazing facts that are indisputable, of course that is my opinion. But I really want to talk about that Third Temple and let’s see what the Bible says

THE NEW TEMPLE AND THE ANTICHRIST!

I’m going to get a little push back on what I’m getting ready to say, but please stay with me. First of all I believe in what’s called the “Pre-Tribulation return of Christ” which means I believe that Jesus Christ will come back for His Church/Bride before the Tribulation period. Why because it’s clear the bible teaches us that Christ will not suffer His Children to go thru the Wrath of God and that is exactly what the Tribulation period is, along with the restoration of Israel. The opening of the eyes of God’s Ancient people the Jews. No matter what you believe you have got to believe Israel is getting ready for their Messiah, and I believe it won’t be long.

Now that third Temple, first of all I believe the Anti Christ will come from the descendants of Ishmael and that the Anti Christ will make a peace treaty with Israel, now let me ask you this, who are the only people/Nations that we see in the news who are constantly being asked to sign a peace treaty with Israel? It’s the Arab/Muslim nations, right? So if they are the only one’s being asked to sign a peace treaty doesn’t it make sense to say they are? Oh yea, it really does. Let’s move on!

THE TEMPLE MOUNT/DOME OF THE ROCK! 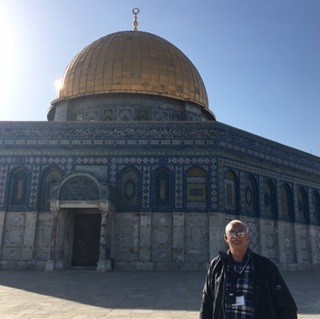 The Dome and Al-Aqsa Mosque are both located on the Temple Mount, the site of Solomon’s Temple and its successors. The Dome of the Rock was built between AD 685 and 691 by the caliph ‘Abd al-Malik ibn Marwan, not as a mosque for public worship but rather as a mashhad, a shrine for pilgrims.

There it is right behind me just in case you didn’t know! You see, everybody is talking about building the third Temple which the Jews will do one day, but lets reason together here Muslims built this, so if the Jews are going to make a peace treaty with the Arabs/Muslims Palestinians, and the Anti Christ is from the descendants of Ishmael, it makes perfect sense that they will set up His temple in this very spot, the most Holiest spot on the face of the earth.

Why would the Anti Christ after signing a peace treaty with Israel build a Jewish Temple only to desolate it after 3 1/2 years? Please remember the Anti Christ is signing a peace treaty with Israel not the other way around, He is going to be in Charge and the Jews will believe He is the Christ/Messiah they are being deceived! He will rule the world, finally Satan is having His heyday, the Church is gone, God is going to send a strong delusion! Read it:

”2nd Thessalonians 2:1 Now we beg you, brother, by the coming of our Lord Jesus Christ, and by our gathering together unto him, 2 That you be not soon shaken in mind, or be troubled, neither by spirit, nor by word, nor by letter as from us, as that the day of Christ is at hand. 3 Let no man deceive you by any means: for that day shall not come, except there come a falling away first, and that man of sin be revealed, the son of perdition; (Anti Christ) 4 Who opposes and exalted himself above all that is called God, or that is worshiped; so that he as God sits in the temple of God,(Dome of the Rock) showing himself that he is God. 5 Remember you not, that, when I was yet with you, I told you these things? 6 And now you know what withholdeth(Or holds back) that he might be revealed in his time. 7 For the mystery of iniquity does already work: only he who now holds back will hold back, until he is taken out of the way. 8 And then shall that Wicked One be revealed, whom the Lord shall consume with the spirit of his mouth, and shall destroy with the brightness of his coming: 9 Even him, whose coming is after the working of Satan with all power and signs and lying wonders, 10 And with all deceivableness of unrighteousness in them that perish; because they received not the love of the truth, that they might be saved. 11 And for this cause God shall send them strong delusion, that they should believe a lie: 12 That they all might be damned who believed not the truth, but had pleasure in unrighteousness.”

So you see, I believe with all my heart that this is going to be the very place Satan, and the Anti Christ and the false Prophet will rule the world from, right here on the most holiest place on the earth, The Temple Mount!

PREPARING THE WAY for the THIRD TEMPLE!

EZEKIEL 37 26 Moreover I will make a covenant of peace with them; it shall be an everlasting covenant with them: and I will place them, and multiply them, and will set my sanctuary in the midst of them for evermore. 27 My tabernacle also shall be with them: yes, I will be their God, and they shall be My people.28 And the heathen shall know that I the LORD do sanctify Israel, when my sanctuary shall be in the midst of them for evermore.” Amen

The great Rabbi Moses Maimonides (A.D. 1200) taught that the study of the Temple has eternal meaning because it really reveals the very nature of God and His relationship to Israel. Rabbi Moses noted that the Torah included God’s direct command to build the Temple: Exodus 25:8-9 “And let them make me a sanctuary; that I may dwell among them.9 According to all that I show you, after the pattern of the tabernacle, and the pattern of all the instruments thereof, even so shall you make it”.

So here you have it, God gave Moses His blueprints, a pattern for the Tabernacle that would make sure the earthly sanctuary would look as far as humanly possible like the hevenly sanctuary. You see both the Tabernacle created in the wilderness after the Exodus and the magnificent Temple that was built by King Solomon were patterned after God’s eternal sanctuary in the heavens-even the details of the instruments they played to worship God and also the very vessels that were sacred. 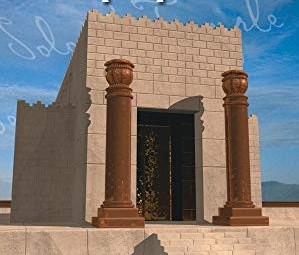 ToSETTING THE STAGE FOR END-TIMES EVENTS
Researchers for the Temple Institute and the religious leadership in Israel have made so much progress in their preparations to rebuild the Third Temple.
With plans moving forward to resume the sacred worship rituals in a rebuilt Temple, a major prophetic sign is in place pointing to the fact that Jesus Christ’s return is at hand! They will build Jesus Christ that third Temple when He returns, and He will rule and reign for 1,000 years right there in Israel with a rod of iron and all the nations will worship Him as King of Kings and Lord of Lord.
This of course is consistent with all the prophecies that indicate the Third Temple will be built before Christ’s return. Satan’s is coming as a dictator, the Antichrist. He appears and takes control of the ten Nations of the revived Roman Empire and the nations of the world. And for seven long years he rules as the Savior of the world.
Conclusion: No one knows for sure when this next major event will take place, but the Bible says when you see these thigs start to happen, (what things? Read Matthew 23-24) be looking up for my redemption is getting close, the real question is this:

HAVE A GREAT DAY!